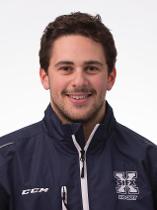 Say hello to Scoutlete’s Athlete Of The Week Nathan Chiarlitti of the St. Francis Xavier Men’s Hockey Team. Nathan is an X-Men Defensemen and having just participated in his 3rd year of eligibility was named MVP of the 2016 Subway AUS Men’s Hockey Championship, was named to the 2016 AUS second team all-star squad for the second consecutive year and was also the recipient of the Godfrey Award for student-athlete community service.

Chiarlitti, a 4th year BSc human kinetics student originally from Maple Ontario, helped push the X-Men to their first playoff title since 2004 with 3 goals, 4 assists and 20 shots on net. During the regular season Chiarlitti played in each of the teams 28 games and had an impressive 62 shots, led all defensemen with 15 points (3 goals/12 assists) and ended the regular reason with a notable +14 rating.

Nathan is not only an outstanding athlete, team leader and voice in the community but also continues to impress academically being a fourth year Dean’s list student and achieving CIS academic all-Canadian status for the second year in a row. For more information, statistics or information on Atlantic University Sports Student-Athletes or opportunities please visit their website HERE. For more information on St. Francis Xavier athletics please follow the link to their athletic department HERE.

Congratulations to Nathan Chiarlitti on both his athletic and academic achievements as well as being Scoutlete’s Athlete Of The Week.